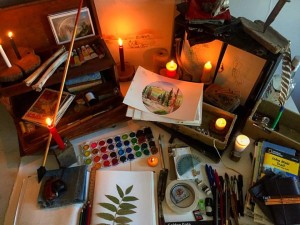 Well-known California wilderness painter Obi Kaufmann was killed last night in a candle fire that consumed his Oakland studio. Kaufmann was reportedly finishing up a series titled “Trail Snails” when one of the 42,000 candles he used to light his studio tipped over and started a small fire in the pine needles Kaufmann sleeps on.

Kaufmann first reported the blaze to 911 operators at 8:34 p.m. (PST) Sunday evening. According to other operators at the call center, Mr. Kaufmann was on the phone with 911 for over three hours before succumbing to the blaze. Through silent protest, the Oakland arts community kind of expressed outrage over the delay, some even emailing Fire Chief Ron LaGando to ask if he wouldn’t mind resigning. The Oakland Fire Department has defended the criticism, stating that they were entirely ready to respond but that it was Mr. Kaufmann who was having a hard time finding a piece of mail to read his address off of.

A partial transcript of the 911 call was made public by the Oakland police department this morning.

Mr. Kaufmann: Well. I’m just not one for government intervention, except for animals, but I’ve got a bit of a situation here.

Mr. Kaufmann: I was lighting candles to do some photos for Insta and I’ve started a small fire. I’m trapped in my studio.

911 Operator: So you’re a photographer, sir?

Mr. Kaufmann: Huh? Fuck no. I’m a painter, man. I was just taking some photos for Insta.

911 Operator: Insta? Is she there with you now?

Mr. Kaufmann: No. Instagram. I do these really cool shots of my art surrounded by a few thousand candles for my feed. It’s kind of what I’m known for.

911 Operator: Well, is there a window in the studio you could open and crawl out of?

911 Operator: Have you tried to open the door?

911 Operator: Do you have a pair of jeans you could cover your face with?

Mr. Kaufmann: I only own one pair of jeans and I’m wearing them. I’m not taking them off.

News of Kaufmann’s death spread quickly throughout the California wilderness community. Juniper Ridge owner Hall Newbegin said that Kaufmann was “a really neat guy” but refused to comment further, stating that the company was being investigated after fire marshals found a “sweet smelling sappy accelerant” throughout Kaufmann’s studio.

Matt Decker, owner of Premium Tattoo said Kaufmann’s contributions to his business will sorely be missed. “Before Obi, I was doing like one or two cayote and dreamcatcher tattoos a month. Now, it’s basically all I do. I’m really going to miss that guy and his energy.”

However, not all was lost in the tragedy. In one last gift to his fans, investigators found a letter penned by Kaufmann, presumably written sometime in the 2nd or 3rd hour of his 911 call. To his followers, it stated: “Moon blender makes a Chelada. Toast goes on bread. Propecia faces stare down from ancient worlds and exclaim, “These are tacos! Yes! These are tacos!”

A private service will be held for Kaufmann this Thursday within the grounds of Joshua Tree National Park. Attendees are encouraged to bring their own gasoline.